skip to main | skip to sidebar

Hopper and Homer in Chicago

I had a great Easter weekend down in Chicago with family and on Friday I went to see the Edward Hopper and Winslow Homer Watercolors show at the Art Institute of Chicago. It was a real treat. I've long been a huge fan of Edward Hopper's work, mainly for his attention to light and shape. I had seen many of Homer's watercolors in reproductions, but in person they were truly amazing. Homer's attention to detail with a fine pencil and skill with a brush is unbelievable. I've done a lot of watercolor work and could tell by the boldness of his brushstroke and the quickness and gestural quality of the painting that his skills were off the charts. Plus, Homer's work is much brighter than in reproduction and even more impressive the closer you get to the painting.

Hopper's work is the exact opposite. When you first see his paintings from around a corner in a well lit space, they really do pop and take you completely by surprise. Upon closer inspection, they are very loose in brushstrokes  and look almost incomplete in places. I'm working now on my April paper on influential artists so this was a great exhibit to see at the perfect time.
Posted by Nate at 6:04 PM No comments:

I met with my mentor Mike Carson again yesterday. He had some good things to say about what I've been working on, and he had great suggestions about painting flesh. His entire technique is wet on wet, with thick paint applied in quick strokes with a huge brush. He's able to imply a lot more with less, and I am the exact opposite right now. My biggest weakness as a painter is my approach to detail. I tend to overwork things forever until they look worse than when I started. He challenged me to try some faces with a  wet on wet technique. Last night I spent a few hours trying, and it was a total disaster! I basically wiped it all off and got nothing for the work... Mike said he was once told to "paint like he was rich", or in other words, use paint as if it wasn't expensive. He's right. I need to thicken my paint and be bolder. It's just frustrating to be experimenting now...

I also watched "All About Eve" (1950) last night. It won best picture and a slew of other oscars in 1950. It feels more like a much older film. There were times when it was very slow, but the story comes together in a great way with some character twists. It feels a lot like watching a drawn out theater piece. The lighting is great and the Overall, a great film that feels the period. If this film was released  today, it would probably get an R rating because every character is smoking for the entire film! Cigarette smoke looks good in black and white- Marilyn Monroe also shows up another breathy role.
Posted by Nate at 6:57 AM No comments: 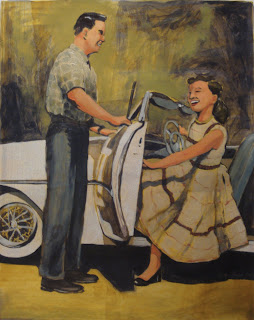 Here's the newest image- I've been playing around with compositions to complicate the figures and blur the backgrounds- I'm not sure what I think of this one- in the photo it was a stand of trees and I figured putting them in there would take away from the figures.... the experimentation moves on. I'm starting to narrow
down which images I'm going to make into canvas paintings. This one is probably a no but I still have a few more studies to make.

On another note, I watched Hitchcock's "Rear Window" last night- His use of continuous camera angles and viewpoints was simply amazing. He also shows nearly the whole movie from Jimmy Stewart's viewpoint, so he make the audience the voyeur. For 1954 this had to be groundbreaking. From an artistic standpoint its nearly flawless, and from a subject standpoint it tackles themes of privacy, ethical responsibility, romance, and sexuality in pointed ways that are absolutely relevant today- all in  a very entertaining way.
Posted by Nate at 11:18 AM No comments: 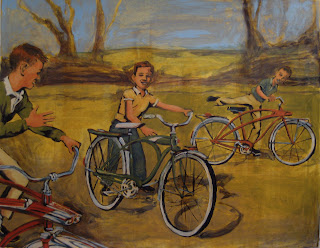 Here's 2 new images- I keep telling myself that I need to work simple (these are in fact studies and experiments for larger paintings on canvas) and yet I keep making the most ridiculously complicated little pieces possible. I can't even tell you how long I worked on the bike piece. I definitely want to make a larger painting based on bikes, so it was good to do anyway. The reference was a few old Murray bike ads, which claimed that "the futuristic look and gentle ride will make you feel like you're flying in outer space". 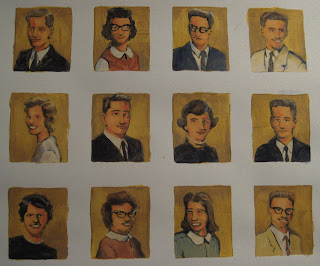 The second image is derived from the many yearbooks I have. They're full of gridded picture pages and quotes, so I made this one as a little bit of departure to see how it works. I'm not sure if I'll push this idea or not.... I'm still toying with it.
Posted by Nate at 6:10 PM No comments: 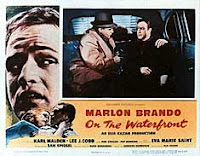 Watched the second of my vintage films last night- "On the Waterfront" starring Marlon Brando. What a great film. The composition of the shots and the lighting, the depth to each frame and the placement of the actors in glorious black and white.... It's a hard movie to pay attention to artistically because the acting is so beyond incredible you just get sucked in.... I was hooked from the opening shot. The famous "contender" scene in the taxi cab really has to be one of the greatest acting moments in film history. Also, there's a crazy atonal musical score by Leonard Bernstein that completely alters the mood and creates the tension where its needed. This picture won best picture and I can't believe I've never seen it. If you havn't seen it you should.

On another note, I have 3 more finished paintings on paper that I have yet to photo and post... hopefully they'll be up soon.
Posted by Nate at 7:31 AM No comments:

I added a list of 50s films to my sidebar that I'm planning on watching this semester. I finally figured out how to use my local library and request them all for free. Pretty much every professor at the residency suggested that I view old films to get the feel of the time period and note the use of lighting and camera placement. I'm thrilled about it because I can watch all the great movies I've heard so much about but never seen! I looked at a lot of top 100 movie lists, along with oscar winners and made a list of 1950s films. Aside from some of the other musicals and a few Disney movies, the only one I'd seen on the all-time list from the period was "Singin' in the Rain", which is dazzling even if musicals drive you nuts. The shear talent of the actors is mind-blowing. I defy any hollywood actor to do what Gene Kelly does... Are you reading this Keanu Reeves?

I watched "Bridge on the River Kwai" last night. A great film I've always wanted to see for a long time. Alec Guiness is fantastic and it was a pleasure to watch it on wide-screen DVD with restored color. The use of light and the placement of actors within the frame on long uncut scenes really stood out to me. Also, watching a period film really does take you back and put you in a different mindset.

I'd love to get some othe suggestions if you have them.
Posted by Nate at 8:03 AM No comments:

I finished off two more study paintings this weekend.... The first picture with the boys having a picnic is a combination of 5 or 6 photographs from 1958 I got from my grandparents. The second is pretty much from one photo of an old carnival. It's my first to depart from the figure as the main subject. I'm not planning on going this direction but I thought the shapes and colors of the ride were worth a shot.... we'll see if I end up using it. 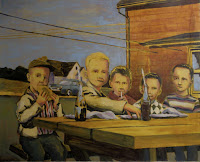 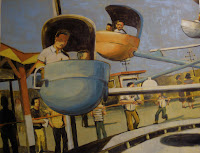